skip to main | skip to sidebar

BMD featured on CD of 'Donald09' Opera by Danielsen 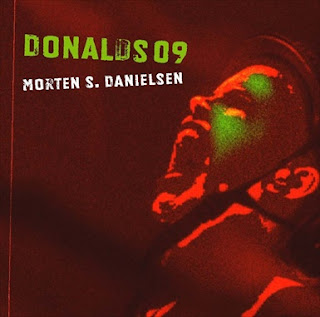 In 2008-2009 we collaborated with Danish composer Morten Skovgaard Danielsen on several works. Several of the pieces are included in his posthumously released opera Donalds09.

We are featured throughout Act 2. Track 8 'Conversations' is a dialogue between Paris Hilton (Allan) and Che Guevara (Kristen). 'This Year I'm A Stray Black Cat' features Allan on processed Double Bass and Kristen on Piano.

Morten had a unique approach to notation. The score often used the 16th note as the beat so the the score was full of 64th notes making the score very complex. Allan remembers asking Kristen and Morten to take a walk while recording the complicated solo bass part.

Morten was a nocturnal creature who would stay up all night composing and then sleeping through the day. We would return home late at night and then rehearse with him during his residencies with us.

Donald09 can be purchased and listened to via Dacapo Records. The opera was positively reviewed by Gapplegate in November 2010.
Posted by Basso Moderno Duo at 2:01 PM 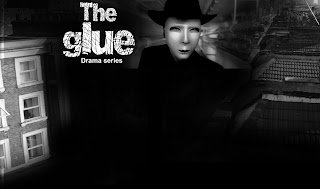 We have just agreed to contribute music to forthcoming British drama 'The Glue'.

The Glue series is a new drama series set in North and East London. Written and directed by Ibi Vaughan. The series explores the lives and bonds between ten strangers from completely different worlds who are brought together in ways that they could never have imagined. Throughout April 2010 we filmed nine introduction stories that will establish the nine individuals who will become members of The Glue. Each introduction story/episode will be released online in the Autumn of 2010. The first series of The Glue will be aired in 2011.

Along with original music we also partnered with Turkmen/Russian composer Maral Yakshieva.
Posted by Basso Moderno Duo at 11:08 AM

"A Due (2008), for the Basso Moderno Duo; Allan Von Schenkel, double bass, and Kristen Williams, piano. Written in Taos, this piece has a lovely bucholic sound, lively and intelligent, emotionally expressive and sonically impressionistic, in which sound worlds of double bass and piano overlap and contrast. This is a meditative, lyrical, impassioned partnership. These younger performers are most impressive musicians". 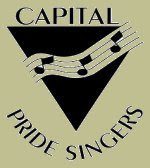 The concert began with a one hour Basso Moderno Duo Recital which featured composers from all over the world including the US Premiere of YOU by Radiohead/O'Riley/BMD. In attendance at the concert was famed composer Pauline Oliveros for whom BMD commissioned 'Blue Heron' in 2007.

BMD were joined on stage by Native American flute player Eric Marczak and storyteller Dawn Standing Woman. The collaboration aims to bring audiences in contact with contemporary Native American artists. This was the second opportunity that BMD has had to work with these fantastic performers and it was a very memorable experience. Eric is also a talented instrument maker and co-owner of Mohawk Valley Guitars.

The Finale of the concert came with the performance of the Capitol Pride Singers who presented a joyful holiday program. The lighthearted music touched on all celebrations of the season including Christmas, Hanukkah and Kwanzaa. The music was fun they brought about an exciting finale. 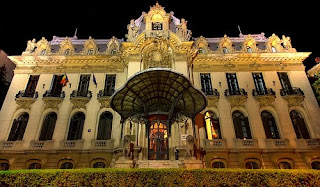 BMD at the George Enescu Museum in Bucharest, Romania

The Basso Moderno Duo recently returned from giving two concerts in Romania. BMD made their Bucharest debut at the famed George Enescu Museum as part of the Meridian Contemporary Music Festival. Several leading composers were present at the concert including Liana Alexandra, Fred Popovici, Ulpiu Vlad amongst others. The program featured mostly new works composed in 2007-2008 as well as other works commissioned by the Basso Moderno Duo. Watch a clip of the performance HERE.

BMD returned for their second recital in the once capital of Transylvania, Cluj-Napoca, performing at the Music Academy alongside composer Iulia Cibicescu-Duran and her notable husband Eugen Cibicescu-Duran, a well known violinist/violist. Afterwards, Eugen demonstrated Romanian fiddle styles by playing music from various regions. BMD discussed future collaborations with Iulia including the composer’s possible first US visit. In addition to the concert, BMD met with composer Ionica Pop and reviewed a recently composed sacred work.

Posted by Basso Moderno Duo at 11:28 AM No comments: 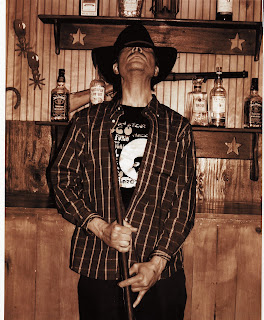 Morten Skovgaard Danielsen, 1967, Denmark, holds a diploma in composition from the Royal Academy of Music, Copenhagen. In 1999, Danielsen achieved the nomination and final selection as a official Danish Composer for three years, thus earning him financial independence and several Composer in Residencies all over Europe.

In 2001, Danielsen was awarded the Haakon Boerresen Prize for “outstanding efforts in the field of contemporary composition”. Alongside other grants, he has successfully headlined international Festivals, given a huge number of interviews on television, radio and in Magazines. In 2002, he announced his 'exit' as a composer and took up writing. His poems have been published in a number of Underground Text-books. In 2004, Danielsen returned to composition. He is currently a constant traveler, receiving commissions from all over the world. After the release of his debut album ROADMOVIE ACCESSORIES 2000/01, he was baptized both 'The enfant terrible' and ' Emblematic for a whole generation' by the press.

BMD: Could you begin by telling us about your current project?

MSD: I am composing an opera which is built up by commissions from ensembles in Europe and the USA. The main goal of this work is an attempt to build a musical symbiosis between Baroque Music and Punk Rock, especially the Grunge movement. I am a huge fan of slap sticks and spent time learning about “Mickey Mouse” techniques as well as my passion of “fairytale-like” or “Magic-Music” is installed in my music. This allows for very sudden change of mood and style such as slap sticks. A lot of cameos are entering the libretto, amongst them Francesco Petrarcha, the Montgolfier Brothers, Che Guevara and Paris Hilton.

BMD: Please tell us about your early works and the various periods you went through.

MSD: I began composing and gave my first concert at age five while attending the Musical Kindergarden in Odense, Denmark. During my time at the academy, I studied every kind of modern composition techniques and I studied hard. I went through three periods of creating music including the “Academic Style”, which offered my knowledge of musical composition mixed up with a manic flirtation with all kinds of Renaissance and Baroque era styles. I easily wasted weeks on writing Palestrina or Bach style movements, especially the fugue. It made me two faced in that by day I would investigate d minor conflicts and at night I was a regular head banger, introducing recordings of early Grunge. The Academy did not approve and considered me a mess.

At age 28, I realized, that the “perfect” piece can never be written. I revised the same piano piece (INSTALLATION, piano solo/electronics, 1994) eleven times in a row. All I learned, was that the “Masterpiece” is outgunned in terms of “over-individualism”. I am not pointing out, that “serious” music - as some people call it to somehow draw a line between music for the classic concert hall and whatever appears to be “not serious”. I am certainly no fan of “work in progress”. Attempting to finish other commissions in this period also failed. I got to a point of “positive depression”. Each OPUS became impossible. Indulging in a high speed life style, I began to provoke without any intension of being provocative at all while just being plain honest about my opinions and attitude. At age 32, I trashed all my home made “systems”, writing the piece TripInVainwithStarsbutSUGARfeelOkay in one single afternoon during a severe hangover in South Italy. In Paris, during the fall of 2000, I gave up any attempt of writing what I felt would at least somehow resemble a “finished” piece, re-writing D-TOX for violin solo (originally written in Rome 1999 for a small ensemble). My perfectionism was at last installed in the tempo in which I from then on enjoyed to compose. My Dogma opera was composed in 21 hours, in which I was locked up in a hotel rom. I wrote both the libretto and the music, using note sheets marked by the Danish Radio Broadcast Company. It began as a show off and ended up performed 12 times in a row during 2005.

BMD: What aspects of your earlier works is still present in your work today?

MSD: Farthest from your mind is the thought of falling back. In fact, it isn´t here at all, so you dig your hole carefully and you wait.

BMD: Who is influencing you now?

MSD: People! People like the Basso Moderno Duo. Contradictions! I love contradictions as much as I hate boarders between nations. I look upon every single life as a type of installation. Existence is art in itself and every second is a performance. Someone once said: “A sculpture is something you stumble upon in a museum, moving backwards to get a better glance of a painting.” That is my point. I constantly “stumble” over people and I install them in my memory as sculptures. Modigliani saw people the same way. That would explain his obsession with portraits, eyes without pupils, and open spaces of never-seen landscapes. Every individual is a piece of art and vice-versa, which puts the definition of “art for art’s stake” as well as being mere existence. All of that influences me.

BMD: Is your music in a single style or do your compositions differ from work to work?

MSD: I tend to write very energetic music with lots of grace notes. This has been my style over the past thirteen years. Both the music of Bach and Cobain was equally important to me. It was my goal to create a symbiosis between baroque music and Punk-Rock. I am a mixture of Stockhausen, Cobain, myself and hard core punk.

BMD: From the interviewers’ perspective, your music challenges the traditional classical music listener. Which one of your pieces/projects do you feel pushes your own boundaries?

MSD: That would be the CD project SHOTGUN DIARY (2001-02) and my first opera ABSENSE.

BMD: Do you prefer to compose music that will ultimately be performed live or music which is meant solely for recording?

MSD: Both. Live performances are still limited to festivals, concert halls, underground scenes, or whatever. The recording is much more powerful. It is the way people absorb art these days.

Posted by Basso Moderno Duo at 9:09 PM No comments: 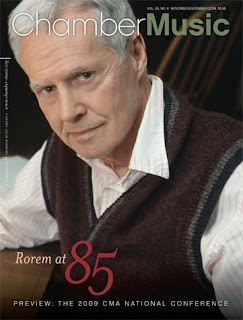 The Basso Moderno Duo would like to thank Ned Rorem and Frank J. Oteri for mentioning us in the recent Chamber Music cover story ‘Rorem at 85’. Chamber Music is a journal published by Chamber Music America.

“At the other extreme of the string resister is Nocturne, for double bass and piano (2007), a three-minute work in which the bassist plays a soaring melody from its lowest to highest registers, as the pianist maintains a steady flow of eighth notes.

Nocturne was premiered last year at the Smithsonian by the Basso Moderno Duo”.

Basso Moderno Duo
Basso Moderno has commissioned over 100 lyrical works for solo bass and piano by some of the world's most prominent and exciting living composers. Composers from 40 countries and all 7 continents have written specifically for Allan Von Schenkel's virtuosic and highly individualized manner of playing. Kristen Williams' piano playing is a perfect complement to the intense voice of the solo bass. Williams is a focused musician who is able to share her devotion to the piano with the listener. Our program is designed to delight and surprise audiences with a combination of lush sounds, tasteful writing and lyricism.